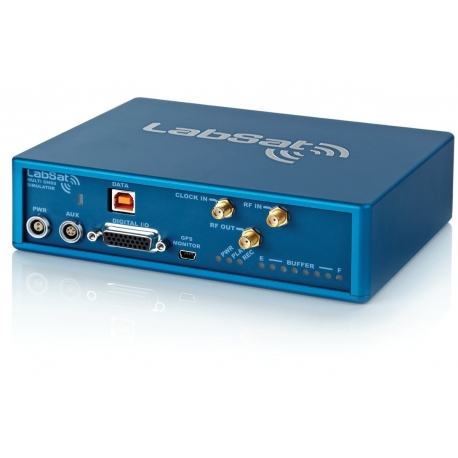 This product is no longer in stock

Why use a Real-Time GNSS Simulator?
By connecting a real-time simulator to your device it allows you to test GPS RF signals with a current time stamp simulated from anywhere in the world. You can test specific trajectories and geographical locations all from your bench, saving you hours in real world testing.
Using LabSat RT gives you a realistic carrier to noise levels and repeatable signals all in real-time.
By using SatGen v3 software you can define the position, route, speed, date, and time, as well as the number of satellites included in the data stream. It also gives you the ability to vary the individual carrier to noise levels for each satellite, allowing you to control the data being streamed directly into your device.
By using a powerful PC the system can generate GPS, GLONASS, BeiDou L1 signals in single constellation (1 or 2-bit) or dual constellation signals at 1-bit each.

How does it work?
SatGen v3 software generates a live signal stream to a LabSat RT unit. The unit then converts the RF data from digital to analogue with less than 1 second latency.
If you have an NMEA or KML file of your route, you can simply import this directly into the software.
Alternatively you can create a scenario from scratch, either by creating a route in Google Maps, or by building a unique trajectory using simple user-defined commands.
When playing, the PC streams the live data via USB directly to the LabSat RT. The unit then converts the data into a signal stream to replicate the present real-world satellite signals.
LabSat RT operates at the same time on any two of the three constellations: GPS L1 (1575.42 MHz), GLONASS L1 (1602.00 MHz), and BeiDou (1561.098 MHz).

Which scenarios come with LabSat RT?
All units are shipped with a 500Gb USB drive which contains 25 scenarios. These include static scenarios, as well as actual recorded drives, in places such as London, Detroit and China.

Flyer for the LabSat RT

SOMETHING SPECIAL IS COMING SOON...Are you interested? Join with Us

This site uses cookies to store information on your computer.